Can Zion Kill the NCAA? (Probably Not, But We Can Hope) 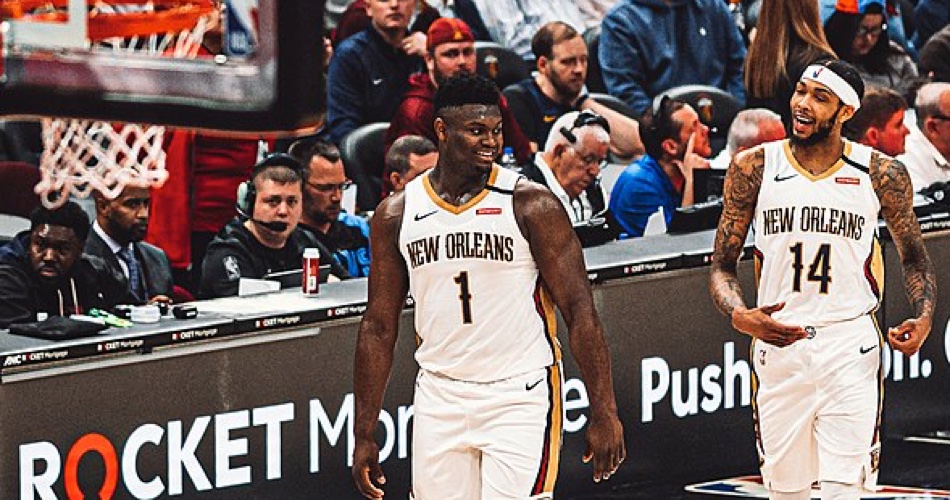 Last night, I went to bed in a reasonably good mood after playing some poker, eating a some sour patch kids, and generally feeling good that I managed not to totally screw up Mother’s Day for my wife. (I even folded her laundry, which is agonizing because she’s been indoctrinated into the cult of turning all clothes inside-out before washing them, which adds a whole extra step to the already terrible folding process.) Everything was good.

And then, at some point during the night, I had a dream that somebody in a Soviet-looking apartment block was holding people captive, and I couldn’t do anything about it. It was one of those nightmares that’s half terror, half frustration, where it feels like you’re just on the verge of rescuing the world, and then suddenly you’re being chased by a man with a mustache and a knife.

My question is: Why, brain? Why must we do this? It was a good day! It should have been a good sleep followed by a pleasant morning. Instead, I woke up at 6:30 rippling with anxiety and won’t be right until noon. If you know of anyone selling a normal brain, please let me know.

Patriots owner Robert Kraft is auctioning off one of his Super Bowl championship rings (the comeback win against the Falcons) to benefit a charity that raises money to alleviate hunger among the poor. Kraft’s attempt to “feed the needy” stands in stark contrast to his infamous recent visits to a strip mall massage parlor, where he was recorded asking the masseuses to “knead the meaty.”

(I hate that joke, and hate myself for writing it. This is the lowest moment of my life. It might be the nightmares. You are all within your rights to unsubscribe and never speak to me again.)

Episodes seven and eight of The Last Dance chronicled Michael Jordan’s tendency to bully and humiliate his teammates, and featured Will Perdue calling him an “asshole,” and Jed Buechler saying the other Bulls were afraid of him. Jordan’s response was that it all came in the service of winning a championship, and that winning was his only goal. “What’s your excuse now?” asked former teammate Scott Burrell, attached by a chain to a drainage pipe in Jordan’s basement.

Only six of 5,754 people tested among Major League Baseball’s employee population came back positive for coronavirus antibodies, according to a recent study. That said, “Antibody Average” is no longer seen as a definitive statistic, and sabermetricians prefer more advanced stats like VODPA (Virility of Disease Per Antibody), TOVIA (True Overall Value of Infected Asset), ROSPEL (Rate of Sickness Per Expendable Lackey), and D-BoPID (Dead Bodies Piled In Dugouts).

A new filing in a lawsuit by Zion Williamson’s former agent makes the claim that Williamson and his family took improper benefits from shoe companies and representatives from Duke University prior to his year in Durham. In response, Duke fraternities said the news was a real downer, and would put a major damper on their upcoming Apartheid-themed COVID parties.

Uncomfortable joke aside, it’s impossible for me to read about Robert Kraft and a Super Bowl ring without thinking about what is truly one of the most fucked-up stories I’ve heard in our realm of sports: The time Vladimir Putin literally stole one of Kraft’s Super Bowl rings.

Yes, this is something that absolutely happened, and I can’t tell if it’s hilarious or terrifying. Here’s the story from Kraft, told in 2013, eight years after it went down:

Back in 2005 Patriots owner Robert Kraft was in Russia when a funny thing happened: Russian president Vladimir Putin stole his $25,000 Super Bowl XXXIX ring. Actually for the past eight years, Kraft had let everyone believe he gave the ring to Putin as a gift, but the truth came out this week: Putin stole it — or took it without asking if ‘stole’ is too strong of a word for you.

“I took out the ring and showed it to [Putin], and he put it on and he goes, ‘I can kill someone with this ring,'” Kraft said at an event this week, via the New York Post. “I put my hand out and he put it in his pocket, and three KGB guys got around him and walked out.”

He never saw the ring again! And the most insane thing of all is that when he spoke to the White House about it, they told him to pretend it was a present for the sake of diplomacy:

He released a statement to that effect (the language is hilarious: “A great and knowledgeable sports fan, Putin was clearly taken with its uniqueness…At that point, I decided to give him the ring as a symbol of respect and admiration…”), and there the story ended…at least for the next eight years.

Even crazier, when Putin was told of the accusations, he offered to give a replacement ring back. Not the real one! A REPLACEMENT. That, my friends, is quite a troll.

OKAY, BACK TO NCAA RAGE

One of the results of having no actual sports in our world is that the other stuff gets amplified, and I spend way too much time each day thinking about how much I loathe the NCAA, and how, at its heart, it’s a criminal racket forcing its major employees to engage in their own smaller crimes in order to secure the valuable unpaid labor, i.e. players, that makes them all their money. For more ranting, see the NCAA section of this post.

The new stuff that came out this weekend, as you see above, is that Zion Williamson’s agent is playing very dirty by, uh…probably telling the truth about Zion’s high school days, and how he ended up at Duke. I wrote about the whole sordid business for The Loop, which I’ll link here when it comes out later today, but here are the main things you have to know:

All of this is undoubtedly true, and Ford is probably doing it in order to scare the shit out of them and get a bigger settlement from CAA. If it works, and it probably will, we’ll hear no more about it and the NCAA will be able to do what it wants, which is to sweep it under the rug. I will hope against hope that she’s in it for pure revenge, but money will likely prevail.

But I just want to make a point, yet again, that is probably becoming tiresome: Set up a for-profit, billion-dollar system where the individual schools and coaches make the most money by recruiting players who can’t be paid legally, and they are going to pay them illegally as high schoolers. And when those schools are sponsored by a specific shoe company (Duke is a Nike school), and getting a player to a friendly school is critical to long-term pro sponsorship deals, the shoe companies are also going to pay them illegally as high schoolers. How long does this have to happen before we scrap the system? How long can the idiotic double standard last? Pay the players, and let them go pro if they want, and a lot of this shit goes away overnight.

The other big point I made in the Loop piece is that Duke is a golden goose and probably too big to fail, and it would be hilarious if the NCAA was forced to act, as it was against Louisville and Kansas and the other Adidas schools. And I hope if they do, Coach K comes down on them like a ton of bricks for their hypocrisy. He might be the one guy with the status to kill the NCAA singlehandedly, and he’s late enough in his career that he might not give a shit.

Honestly? Nothing that appeals to me, but I got lost in poker last night so I’ll use this opportunity to catch up on The Last Dance. I recorded it, but last night’s episodes are replaying on ESPN2 starting at 9 if you didn’t. I’m excited to see Michael Jordan yell at people.

If there’s one thing I like almost as much as sports, it’s the detective/spy/crime genre in any form, from books to TV to movies. If you share similar tastes and need a new TV show, far too few people have seen the most recent John LeCarre adaptations from the BBC, The Night Manager (2016) and Little Drummer Girl (2018). There have been some really good LeCarre movies (A Most Wanted Man, one of Phillip Seymour Hoffman’s last films, is my favorite), but the miniseries have been the best, from the old Alec-Guinness-as-George-Smiley BBC gems to these modern productions. Night Manager and Little Drummer Girl are both six episodes long, and once you start, you won’t be able to stop. For more on both of them, and the other LeCarre shows, check here. You can watch both shows on AMC with a cable login, The Night Manager is free if you have Amazon Prime, and you can do a free one-week Sundance subscription on Prime to watch Little Drummer Girl…just remember to cancel at the end.

That’s it for today—a new podcast comes out tomorrow, and I’ll be speaking with Drew Magary, author of the new book Point B and formerly of Deadspin, for the Thursday podcast.