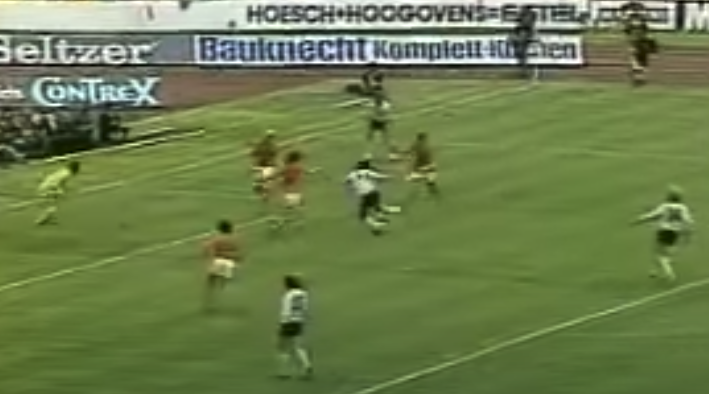 This post is in honor of beloved Patreon supporter Sebastian, a German himself. From yesterday’s trivia questions:

As the question notes, it’s very hard to believe that Hungary was a massive favorite over Germany, in soccer, at any point in history, but that was the case. The answer here is “Magyars,” and the Mighty Magyars were a dominant force in world soccer that decade. In fact, the entire country was an athletic powerhouse, as I noted in this podcast about their dominant water polo team:

The women’s basketball team finished second in the European championships in 1950. The men’s team won the European title in 1955. All through the decade, Hungarians completely dominated Olympic fencing. Agnes Keleti, a gymnast, won 10 Olympic medals in just two games, and the team won three straight silvers. Laszlo Papp became the first Olympic boxer to win three straight gold medals. In fact, at the 1952 Helsinki games, Hungary was third on the medal table with 42 total medals, trailing only the U.S. and the Soviet Union. It was boom time in athletics for the central European powerhouse, and it looked like things would only get better.

That would all change when they revolted against the Soviet Union and were brutally crushed in 1956, which set the entire nation back in incalculable ways. But in ’54, the soccer team was the best in the world, and it wasn’t close. Coach Gustzav Sebes developed the innovative 3-2-3-2 formation, which evolved into the 4-2-4, and basically introduced the concept of “total football,” where every player must have the ability to play every position. For six years, the “Golden Team” nearly went undefeated, and along the way they won some incredibly famous matches. In 1953, they became the first international team outside of the U.K. and Ireland to beat England on home soil. That one was called “the match of the century.” They did the same thing to the Soviet Union three years later, ending their home unbeaten record. At the 1952 Olympics, they won the gold medal easily, and in the 1954 World Cup, they defeated international powerhouses West Germany, Brazil, and Uruguay to reach the final.

But oh, that final. Earlier in the tournament, the Hungarians had defeated the West Germans 8-3, and it seemed like the final would be a coronation. A few strange things happened, though, starting with the Hungarian team staying in a town that had a village fair the night of the final, keeping them up all night, while the Germans were in a quiet lake town. Then, the day of the match, it started pouring in Bern, which was perfect for the Germans to nullify Hungary’s speed and skill.

Still, the Hungarians pounced quickly, taking a 2-0 lead in the first 10 minutes. But Germany didn’t roll over this time, and managed to even the score by the 20th minute. From there, it was a story of Hungarian domination, with chance after chance after chance, but Germany managed to foil them each time. Then, in the 84th minute, the unthinkable happened and the Germans scored. Hungary had two great chances in the waning moments, but couldn’t convert, and that was that—the home side won in what came to be called “The Miracle of Bern.”

Two years later, the Soviets brutalized the country, and the golden age of Hungarian athletics was over. It would have been a neat bit of history had they won, but reality had other plans.

Fast-forward to 1974. If there’s a spiritual descendant of the Mighty Magyars, it’s the Brilliant Orange Dutch team of the ’70s. Led by Johann Cruyff, they took “total football” to the next level, and though they weren’t nearly as dominant as the Hungarians of the early ’50s, they were still the toast of the soccer world for their innovative style, which some believe could only have developed in the liberal culture of an economically thriving nation.

The similarities are almost bizarre. Yet again, this World Cup was in West Germany. Just like the Hungarians 20 years earlier, they scored almost immediately, earning a penalty before a German player had touched the ball. And again, the Germans managed to equalize quickly, perhaps aided by the Dutch, who were accused of arrogant showmanship after their first goal. Just before halftime, knotted at 1-1, Gerd Muller scored the most famous of his many, many goals:

Now, the idea of calling the Germans “magic killers” is very much tongue-in-cheek. They deserved both wins, and it must have been amazing to witness as a German soccer fan. Still, the teams they beat are legendary in the history of the sport, and there’s a certain amount of sadness around the fact that they couldn’t cement those legends with a final win. Maybe it’s the simple reality that a strong system and fortitude under pressure is better than a kind of ethereal greatness, a Rafa v. Roger rivalry playing out on the stage of a team sport. In any case, you could also argue that losing the final to the Germans in some ways added something to the allure of those Hungarian and Dutch teams; it would be one thing to reach the mountaintop, but there’s something special too about the quality of being almost too special to come down to earth and succeed on terrestrial terms.

But, poetic thoughts aside, let’s return to what we know: Blame the Germans.